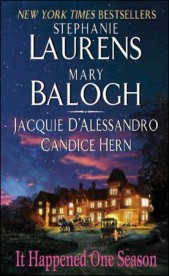 This anthology was the result of the success of the previous anthology It Happened One Night. In that book, four of us wrote a novella based on the same plot. It was a simple, generic plot with three elements that we dreamed up ourselves while on a bus tour. (See Behind the Scenes for It Happened One Night for more details on how that one came about.) The anthology was so sucessful (it made the New York Times bestseller list) that we all wanted to do it again.

But this time, with a twist. We decided it would be fun to have readers choose the plot we all had to write, so we came up with the idea of a contest to choose our plot. Our publisher, Avon, loved the idea and set up the contest in which entrants submitted ideas for a Regency plot set during the social season (because we had already decided on the title, It Happened One Season). We received well over a thousand entries, and the four of us (Stephanie Laurens, Mary Balogh, Jacquie D’Alessandro, and I) read each and every one. After much angst, we narrowed it down to four finalists. Believe me, that was no easy task. We were looking for plots that resonated with each of us, and yet would not confine us so tightly that it would be virtually impossible for our stories to be different from one another.

The four finalist plots, each with three elements, were then posted online, and readers voted for their favorite. Here is the winning plot, as submiited by reader Phyllis Post:

1.  The younger brother of a titled lord, the hero had a career in the army but has lived as a recluse since returning from the war with France.

2.  The heroine is shy or unattractive and after many Seasons has never had a suitor.

3.  The hero’s brother has only daughters and asks his brother to marry in order to try to ensure that succession stays within their family.

That’s the plot we each had to use for our novellas. Once again, we wrote independently, with none of us having a clue what the others were writing. We did not read one another’s novellas until the anthology was ready for production. And once agin, I think we proved that no two, or four, writers will ever write the same story, no matter how similar the plot.

« Read an Excerpt from Fate Strikes a Bargain