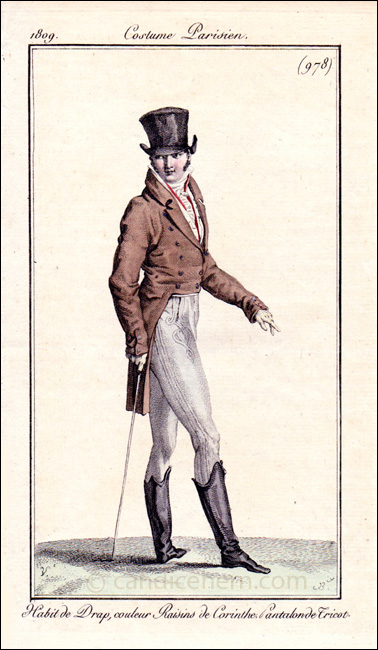 This gentleman is dressed for the outdoors, possibly for riding, but more likely for walking, as he is carrying a walking stick.

The wool tailcoat (“Habit de Drap”) is double-breasted, cut high in the neck, and cut straight at the waist, but short enough to show a strip of the waistcoat underneath. The M-notch lapels are typical of the period.

Though extant British examples often show the sleeve flaring over the hand, as here, the French tended to exaggerate that element, sometimes with sleeves allowing only the tips of the fingers to show. The French were also quite creative in naming colors, as here where the coat is described as the color of Corithian grapes (“Raisins de Corinthe”).

He wears a white collared waistcoat, and appears to have on a red waistcoat underneath. (It was very common in the early 19th century to layer waistcoats in this way.)

The close-fitting knit panatloons are embellished with braid at the fall and down the sides, and disappear into an elegant pair of black Hessians.