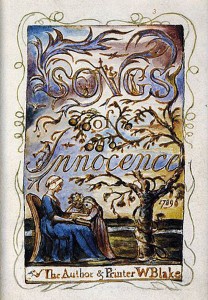 Title page from Blake’s Songs of Innocence. (Click on image to see a larger version.)