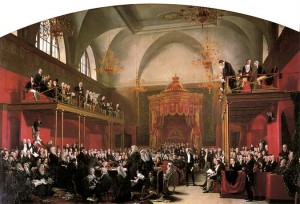 The Hay Wain by John Constable. (Click on image to see a larger version and to read more about it.)