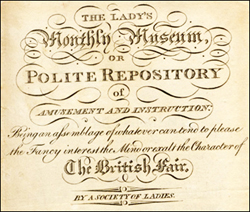 “The Parthenis, led by Captain Hume of South Shields in the county of Durham, was lately driven on shore near that place. All of the people on board, except the Captain (who would not leave the ship), were safely landed by the exertions of the boatmen stationed there for the purpose of assisting vessels in distress. Amongst the anxious spectators assembled to witness the issue was the daughter of the Captain, a beautiful young woman who, hearing of her father’s determination not to quit the ship, resolved, at the hazard of her life, to go on board; and having prevailed upon the boatmen to accompany her, they, with much difficulty, reached the ship, the sea breaking furiously over the boat. On coming to the vessel, this undaunted heroine seized a rope, and was the first person upon deck: she then threw her arms around her astonished parent and, with the unanswerable eloquence of filial tears, prevailed upon him to go on shore, where they landed safely, amidst the applause of the multitude, who seemed to emulate each other in bestowing due praise upon this admirable young person. The vessel weathered the storm, and afterwards got off, though considerably damaged.”

This article is featured in: Tales From the Regency Tabloids, Miscellaneous Tales