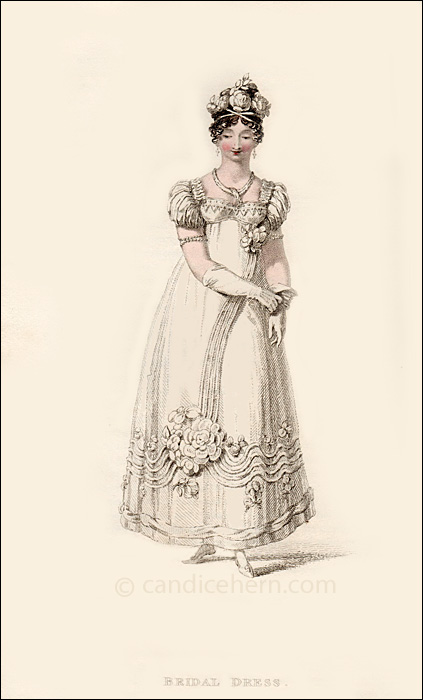 This is yet another full dress, ie formal evening dress, used for a wedding, even though weddings were almost always held n the morning. One wonders if the dress was actually worn at the morning ceremony, or at more formal reception or other event held later in the day or evening?

“A low dress, composed of British net, and worn over a white satin slip: the dress is cur low and square round the bust; the bosom and back are ornamented with white satin points interspersed with pearl; the shoulder strap is finished with chenille. The waist is very short, the dress tight to the shape, and the back of a moderate breadth. Sleeve à la Francaise, made very short and full, and ornamented with ten ten or twelve narrow stripes of white satin placed bias round the arm. The skirt is finished at the bottom by a large rouleau of white satin, which is surmounted by four satin pipings, disposed in waves and interspersed with white roses. The front of the dress is so formed as to have the appearance of a drapery; it is ornamented with pipings, which terminate in a large bunch of white roses: the effect of this trimming is novel and elegant. The hair is dressed high behind, surmounted by a diadem of white roses; a band of pearl is placed across the forehead. The front hair is disposed in ringlets, which fall thickly over the temples as as to leave only a little of the forehead visible. Necklace, bracelets, armlets, and ear-rings, pearl. White leather gloves, and white spotted silk slippers.”

This article is featured in: Regency Collections ~ Within Collections: Fashion Prints, Bridal Dresses