Throughout the 18th century, the city of Bristol was renowned for the manufacture of glass, both window glass and flint glass (ie lead crystal). In the latter half of the 18th century, a local pottery merchant in Bristol sought high quality cobalt oxide, or smalt, for blue and white porcelain, and ultimately obtained exclusive rights to the Royal Saxon Cobalt Works in Saxony. This superfine smalt was brought into England into the port of Bristol. The local makers of flint glass took advantage of this new access to the mineral, and began adding it to their lead crystal to create a striking and distinctive blue glass. This glass became known as Bristol Blue. 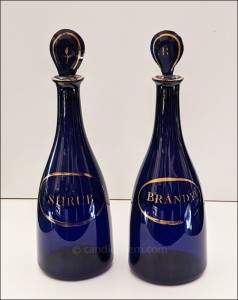 All sorts of objects were made of Bristol Blue glass, but my collection is focused on decanters. Each pair dates from 1790-1800. Each decanter is slightly less than quart size. They are decorated in gilt labels naming the spirit inside, and other motifs. Click on the images to see a larger version.

Figure 1 shows a pair of the most typical shape, with elongated necks and fitted flat lozenge stoppers. The glass is a deep, rich blue. The simple decoration is only the labels, somewhat faded, that read “Brandy” and “Shrub.” Shrub was a fruit liqueur made of rum or brandy, and mixed with sugar and the juice or rinds of citrus fruit. The stopper for the brandy decanter is decorated with a gilt “B,” and the one for shrub has a simple floral motif. 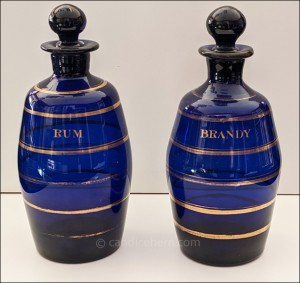 Figure 2 shows a somewhat more unusual barrel shape for the decanters. Most blue decanters are of the type of shape seen in Figure 1, though I have seen at least one other barrel-shaped pair. The fitted stoppers are thick round knobs. Gilt banding, a bit rubbed in places, suggest the barrel, and the name labels are set between the bands: “Rum” and “Brandy.” The glass of these decanters is a slightly brighter blue than the previous pair, and a bit more transparent. 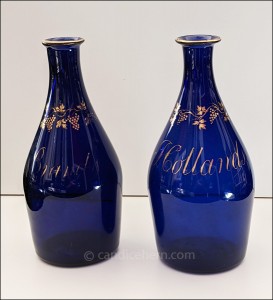 Figure 3 shows a pair similar to Figure 1, but with shorter neck and a slightly more bulbous shape.  The stoppers are unfortunately missing. The gilt decoration at the base of the neck is composed of vine leaves and grapes. The name labels below, in a flowing script, are “Brandy” (partially rubbed off) and “Hollands.” Hollands was a type of gin with added juniper and sugar.

The Napoleonic Wars blocked supplies of Saxon smalt around 1800, and other means of achieving blue glass were used, including artificial ultramarine. But it created a harsher blue tint suitable only for inexpensive pieces. Fine Saxon smalt became available again after the wars, and dark blue glass was again in full production before 1820. At the time of George IV’s coronation in 1821, the distinctive blue glass was, for a short time, called King’s Blue. The king, who loved the blue glass from Bristol, was presented with a lavishly gilded set that included decanters and glasses on a rectangular tray.

For more information on Bristol Blue decanters, see these sources:

This article is featured in: Regency Collections ~ Within Collections: Ceramics & Glassware