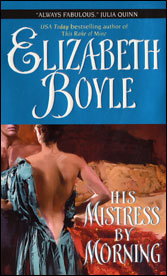 Whenever I write a book, I also like to pick out a wardrobe for my characters. So writing His Mistress by Morning was a special treat because when Charlotte turns into Lottie, she also can claim a closet full of elegant clothes. But where does a twenty-first century writer turn to find clothes for a nineteenth century fashionista? Well, to her good friend, Candice Hern and her collections, of course!

Candice kindly shared a wealth of clothes with me and here is what I picked for Lottie/Charlotte to wear in the various scenes. (Warning: the following contains story spoilers!)

Click on any image below to open another window with a larger image.

On the Way to Arbuckle’s (Chapter 3) 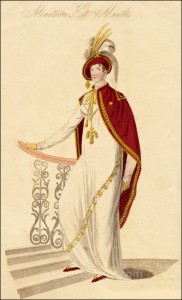 As Charlotte quickly discovers, life as Lottie Townsend has no end of surprises, including the changes to her Cousin Finella. Finny starts the day wearing this Alcantara Hat & Mantle (from La Belle Assemblée, April 1809), which I thought fit the lady’s newfound brassy personality.

I deliberately chose to set His Mistress by Morning in the year 1809 because of the fashions — and tried to make Lottie and Finny’s wardrobe reflect what ladies would have been wearing that Season.  With Cousin Finella, I wanted to make sure that she was dressing not only in the height of fashion, but also in clothes flamboyant enough to reflect her status as a member of the demi-monde.  This almost military styling gives her, I think, an affinity to men and almost a military air, which also coincides with the way she bosses Lottie around.

The moment I saw this dress in Candice’s Collections, I knew I had to use it. Not once, but twice, so that both Lottie and Charlotte could wear it. The dress had that Mae West sort of style to it, the sort of dress a woman would wear because she wanted to be noticed, but the elegance of the velvet and plumes added that dash of style that made it the sort of gown not any woman could wear. It is this dress that gives Charlotte the confidence to be the woman she was destined to be.

Here is the description of the dress from Ackermann’s Repository of Arts, March 1809: 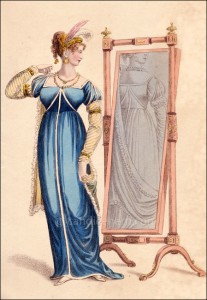 While Charlotte chose this dress to capture Sebastian’s heart, little did she know his plans for the evening would take her to the very scene of inspiration for such a dress. I thought this elegant, Grecian styled gown was exactly what she should be wearing when Sebastian takes her to the British Museum to view Townley’s marbles.

Since I was setting this scene at the museum, I spent some time looking at pictures not only of the fashions from this time period, but from Townley’s collections.  I suspect this gown and many others found their inspiration in the statues from that time period. 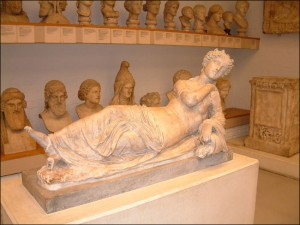 Here is a picture I took at the British Museum from the Townley Gallery.  The drape on the statue and her hair (as well as the hairstyles on the busts in the background) look very similar to this fashion plate.

So this is how I described it all, using the fashion plate as my guide, to give Charlotte the same dress, hair, headdress and jewelry:

And now all these hours later, Charlotte stood dressed in a blue satin evening gown.  White ribbons crossed over the front the bodice, and over the tops of the sleeves giving it a Grecian air.  To add to the theme, she’d begged Finella to do her hair up like it was in the portrait — though Finella saw no reason to go to such trouble when Sebastian’s heart was secure and his pocketbook empty.

But Charlotte’s pleas finally prevailed and once Finella had worked her magic, adding a gold headband studded with sapphires to her creation and pulling from a locked chest an elegant pair of hoop earrings and a tiered necklace that matched the headband.

Finally, when the lady had tucked in a white plume and gold tinged feather into the side of Charlotte’s hair, even Finella had to smile, pronouncing Lottie “utter perfection,” as well as “an utter waste of time.” 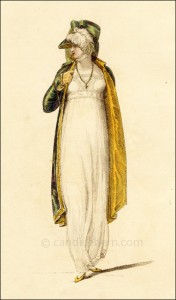 When Quince finally corners Charlotte outside her home, she thinks with no small bit of envy:

The door opened shortly thereafter and as luck would have it, Charlotte came down the steps with only her maid, Prudence, in tow.

Quince glanced at Charlotte’s dress—a beautifully trimmed muslin gown and a Tyrolese pelisse in green velvet that fell to her knees. Atop her head was wonderful hat with a great ostrich plume and green satin ribbon.

Lovely, she mused before looking down at her own drab gown. A bit of long forgotten vanity got the better of her and for a moment she envied Charlotte her fancy silks and glorious gowns.

I agree with Quince — and it was the pelisse and hat that caught my eye, especially the hat and I couldn’t resist using it for this scene. 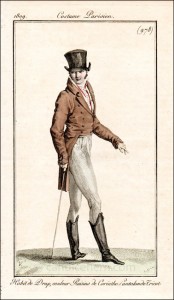 While the early and later versions of Sebastian tend to be, rather, ahem, stuffy, so I thought this gentleman was the perfect example of our hero in his rakish glory. Stylish and dapper, I saw this as Sebastian’s costume of choice on the day he rescues Charlotte from Lord Lyman and later takes her to the races. I just think this fellow has this reckless sort of Corinthian air about him. A bit sporting, and enough confidence to carry it well.

This article is featured in: Regency Collections