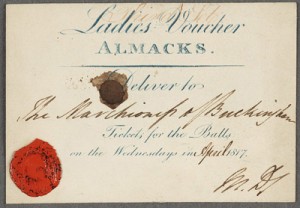 Assembly rooms on King Street in London. Private, very exclusive subscription balls were held there each Wednesday night of the Season. The annual subscription fee was 10 guineas, but only those who were approved by the lady patronesses were allowed to purchase subscriptions, or individual ball tickets. From 1765 to 1863. the committee of patronesses ruled supreme. In his memoirs, Captain Gronow wrote that the lady patronesses in 1814 were Lady Castlereigh, Lady Jersey, Lady Cowper, Lady Sefton, Mrs. Drummond-Burrell, Princess Esterhazy, and Countess Lieven. Other contemprary sources mention Lady Bathhurst and Lady Downshire. Captain Gronow called Almack’s “the seventh heaven of the fashionable world,” and said, “The gates were guarded by the lady patronesses whose smiles or frowns consigned men and women to happiness or despair.”

The Almack’s Voucher shown here is from the exhibit “Revisiting the Regency”, Huntington Library, San Marino, CA, 2011. The voucher is assigned to the Marchioness of Buckingham. It is signed with the initials “M.D.”, which likely refers to Mary, Lady Downshire, one of the patronesses. This voucher is for balls in the month of April only, so apparently Lady Buckingham did not have an annual voucher.