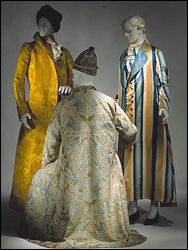 A loose-skirted coat worn by men as a dressing gown. They were typically worn over a shirt, waistcoat, and breeches or pantaloons, ie the gentleman would be dressed in all but his coat. The banyan would be worn while having breakfast alone, and when receiving morning visits from male friends. Though there was a brief period in the mid-18th century when it was fashionable to wear an elegant banyan in public, for the most part, a banyan was only worn in the privacy of one's home.

The banyans shown here are from the Metropolitan Museum of Art, British c1780, when banyans of very costly materials were de rigeur.