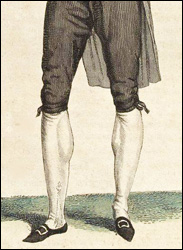 Worn for both evening wear and day wear. For riding, sport or country attire, they might be made of leather or buckskin, and were more or less the equivalent of a pair of jeans. For evening, or for formal servants’ livery, they might be made of satin. The front of the breeches opened with a flap called a “fall” that buttoned at the hips. Breeches fastened at the knee, or just below the knee, with either buttons, ties, or buckles. During the Regency, breeches were generally high-waisted and full at the hips. (Ladies would be unlikely to ogle a gentleman’s bottom while he wore breeches. They were not tight-fitting enough to be interesting.) By the late Regency, pantaloons had almost completely replaced breeches for day wear when boots were worn. Breeches continued to be worn for very formal evening occasions until the 1820s when trousers replaced breeches for full dress. Breeches also continued to be a requirement of gentlemen's court dress throughout the 19th century.