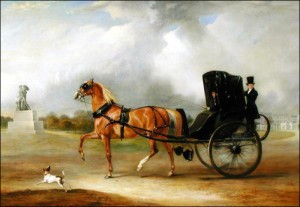 A open-air owner-driven two-wheeled vehicle similar in appearance to a curricle except that is was designed for a single horse only, and instead of a seat in the back for the “tiger” there was only a small platform on which he would stand. It came into use about 1810, but reached its peak of popularity during the early Victorian years.