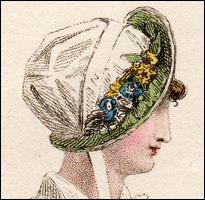 A transitional form between a cap (soft, unstructured) and a bonnet (rigid, shaped). The brim is made of stiffened fabric, but the crown is of soft fabric shaped into a sort of pouch. The capote first made an appearance in the 1790s and continued throughout the 19th century, with the brim or poke becoming larger over time. It was meant for outdoor wear, though in the early years of the 19th century evening capotes were occasionally worn, though the brims would have been abbreviated.

The print is a detail from "Promenade Costume," Ackermann's Repository of Arts, September 1811.