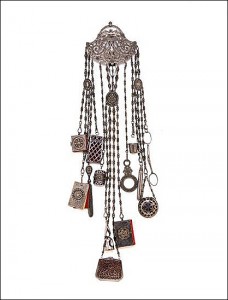 A set of decorative and useful items hung at the waist, recreating the concept of the medieval chatelaine or lady of the castle wearing her keys at her waist. Keys were still a part of a housekeeper’s utilitarian chatelaine, but they were also worn for strictly decorative purposes by fashionable ladies, and might include a watch and watch key, various etuis holding sewing or writing implements, vinaigrettes, pens, ivory leaves for notes, seals, and tiny coin purses. They were usually held at the waist with a chain, like a watch chain. Also referred to as waist-hung equipages. (Despite the Oxford English Dictionary implying that use of the term chatelaine for a fashion accessory is first recorded in 1851, there are several examples of the term in ladies’ magazines and trade cards of the late 18th and early 19th centuries.)