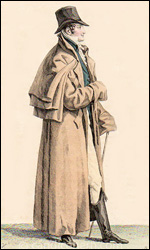 A man’s overcoat, typically with multiple capes at the shoulder, reaching at least the knees and sometimes long enough to almost touch the ground. The capes could hang long, as in the image shown here, or shorter, just below the shoulders. The number of capes could range from two to as many as ten, and were removable. The greatcoat was typically made of wool, and was most often worn for driving, or for walking in inclement weather.

The image shown is a detail of a "Costume Parisien" print from the French magazine Journal des Dames et des Modes, March 31, 1811. The extra long sleeves are a French affectation.