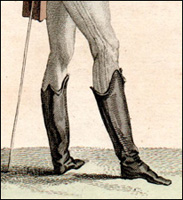 A style of man’s riding boot that is calf-length in the back and curves up in front to a point just below the knee, from which point hangs a tassel. Generally made of black leather, they sometimes had a narrow border at the top in a different color, eg white-topped Hessians. Certain dandies sometimes wore gold-tasseled Hessians. Beau Brummel is said to have kept his black Hessians gleaming by using a special boot polish made of champagne.

The image shows a detail of a "Costume Parisien" print from Journal des Dames et des Modes, May 25, 1809, where the gentleman is wearing knitted pantaloons with Hessian boots.