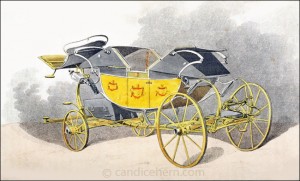 A four-wheeled carriage with two facing seats, a driver’s seat in front, and two collapsible hoods that, when closed, joined in the middle to cover all occupants (except the driver). More often the hoods were folded back, and the vehicle was used as a barouche, ie for fashionable people to ride in and be seen. The landau was invented in Germany in the late 18th century. Though many references cite the first British landau as being built in the 1830s, the print shown here is from Ackermann’s Repository of Arts, February 1809, and is titled “Patent Landau.” The accompanying article says it was built by Messrs. Birch and Son, Great Queen Street, Lincoln’s-Inn-Fields, and included “patented improvements in the construction of the roofs and upper quarters.”