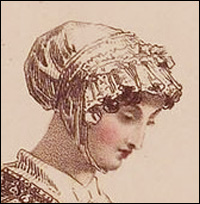 A mob cap, which dated back to the early 18th century, was typically a white indoor cap made of cambric or muslin, with a puffed crown that covered the entire head, trimmed with lace and ribbon. It was most often tied under the chin. During the Regency years, the crown was less puffed and worn closer to the head.

The print shown is a detail of "Morning Dress" from Ackermann's Repository of Arts, May 1813: "The Brunswick mob cap, composed of net and Brussels lace."