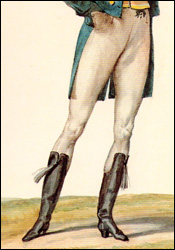 In reference to male fashion, pantaloons are close-fitting tights or leggings that were introduced during the 1790s. They were often called "inexpressibles" as they were quite revealing, leaving very little to the imagination. They ended just below the calf, where button fastenings or straps kept them in place. In the latter years of the Regency, they reached the ankles. Pantaloons had a waist band, with a back vent and a front “fall”. They were generally made of knitted fabric to achieve the close fit. Pantaloons were typically worn with boots.

The image shows a detail of a "Incroyable: chapeau à la Robinson" from Incroyables et Merveilleuses, 1815. The gentleman is wearing very tight pantaloons and Hessian boots.