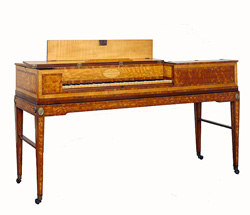 An early incarnation of the piano, developed in about 1730. Keyboard instruments prior to that time could be played with precision but without variation of volume. The pianoforte allowed more versatility by producing notes at different volumes depending on the amount of force used to press the keys. It could be played softly (piano) or loudly (forte) — the full Italian term for the original instrument was gravicèmbalo col piano e forte (literally harpsichord with soft and loud).

The pianoforte shown is a Broadwood, 1791, from Kenwood House in London.