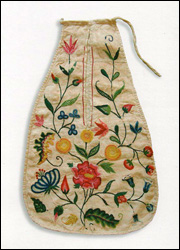 A flat, slitted pouch or bag worn beneath the dress, tied around the waist with tapes. Generally about 12″ or more long. They were accessed via a pocket slit in the side seam of a skirt. Common during the 18th century before reticules (purses) came into popularity, pockets fell out of use when the skirts narrowed during the Regency. However, muslin gowns c1805 in the collection of the Museum of Costume in Bath include pocket slits, so they did continue in use for the early years of the new century, but must have been reduced in size to avoid a bulky look.

The pocket shown here is an 18th century linen pocket from the Museum of Costume in Bath.