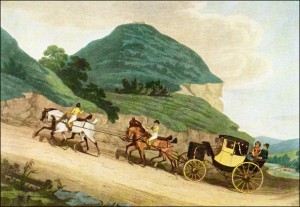 The post chaise or traveling chariot was a small carriage pulled by two or four horses, and was owned or hired by those wishing to travel privately, that is not on a large public conveyance like a stage coach or mail coach. Hired post chaises were most often traveling chariots that had been discarded by gentlemen — sort of like a fleet of used rental cars. The hired chaises were generally painted yellow, hence the nickname Yellow Bounder. They were quite small, usually with only one forward seat facing a large glass window. There was often an outside bench seat in the back, over the rear wheel, where servants rode. Luggage was carried on a little forward platform between the front springs, and could also be strapped on the roof. The post chaise was “steered” by postilions, or post boys, seated upon the horses. There was no seat for a driver, and none was needed. One post boy was engaged to drive each pair of horses, ie a team of four horses was driven by two post boys, a lead-boy and a wheel-boy. Each rode on the left side of a pair, and wore iron guards on his right leg and foot to protect against injury from the center pole. The wheel-boy was generally the more experienced of the two. New post boys were trained by riding the lead team with the wheel-boy calling out instructions from behind. When the horses were changed along the route, new post boys were hired with them. Boys in name only, these riders were generally small, hardy little men, like jockeys, and were often colorful characters nattily dressed in “uniforms” associated with specific posting inns. They almost always wore white leather breeches and short jackets with large brass buttons, and tall beaver hats in which they kept their possessions. Private postilions were kept by those who traveled frequently and used their own traveling chariots. But these drivers often posted only to the first stop on a long journey, driving the owner’s team back home after new horses and post boys were hired.

The print shows a post chaise: “The Elected M.P. on His Way to the House of Commons” by James Pollard, 1817. From the book The Regency Road by N. C. Selway.