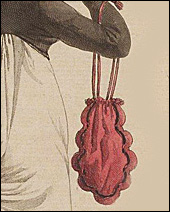 A lady’s purse. More properly called a ridicule, probably because it seemed a ridiculous notion in the late 18th/early 19th century to carry outside the dress those personal belongings formerly kept in large pockets beneath the dress. When waists rose and skirts narrowed, bulky pockets could no longer be accommodated without spoiling the line of the dress, and so the ridicule became an essential accessory. The term “reticule” seems to have come into use around the mid-19th century. It is used often in Candice’s books as the more familiar, if less accurate, term.

The image shows a detail from a "Costume Parisien" print from the French magazine Journal des Dames et des Modes, December 26, 1801: "a ridicule of scalloped-edged tulle."