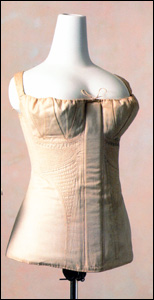 A corset. Stays was the more commonly used term through the end of the 18th century, when he French term "corset" began to be used. Both terms were in common use during the Regency.

Stays of the Regency era were typically long, reaching the hip bones, with shoulder straps and a busk in front. They are most often made of linen or cotton, lightly boned for additional stiffness, and laced up the back. Shorter corsets were also worn during the Regency, but the long corset seems to have been the most popular, as it helped to smooth the line of the vertical silhouette.

The early 19th century stays shown are from the Kyoto Costume Institute.