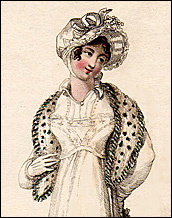 An abbreviated cape. Similar to what might today be called a stole or a boa. In the late 18th century they were long and slender, in the form of a modern boa. By the mid-Regency, they had become a sort of capelet.

The print shows a detail from "Morning & Walking Dress," Ackermann's Repository of Arts, November 1810. It is described as a "French tippet of leopard silk shag."