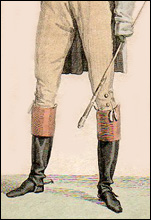 Sometimes called tall boots, as they road higher on the calf, top boots had turned-down tops, often in a lighter color than the boot, and low square heels. Loops on each side of the boot facilitated pulling them on. Boot garters were sometimes attached to the back of the boot and fastened in front, above the boot, as seen in the print shown here. Top boots were usually worn with pantaloons or breeches.

The image shows a detail from a "Costume Parisien" print from the French magazine Journal des Dames et des Modes, December 20, 1811. Dressed for riding, the gentleman is wearing top boots with boot garters and spurs.