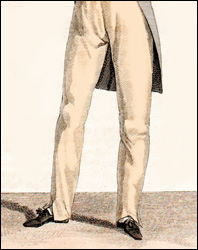 During the Regency period, trousers were basically a type of pantaloon that reached the ankle. They were not as tight-fitting, but instead fell almost straight from hip to below the ankle. Beau Brummell is said to have invented the fashion for wearing black trousers for evening wear, with straps under the foot to keep the trouser line straight. If straps were not worn, often there is a slit at the hem in the front, as shown in the print, allowing a long trouser leg without a break, or bunching up, in the front over the shoe. Trousers were worn with simple shoes or pumps, never with boots.