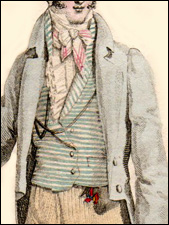 A sleeveless under-coat (what Americans would call a vest), either single or double breasted. During the Regency, they were short, and cut square across the waist. The single-breasted waistcoat was most often worn with evening wear; single- or double-breasted styles were worn with day wear. Throughout the early 19th century, the waistcoat almost always had lapels. Sometimes waistcoats were layered, often pairing a white waistcoat underneath a patterned waistcoat.

The image shown is a detail from a "Costume Parisien" print from the French magazine Journal des Dames et des Mode, December 20, 1811.