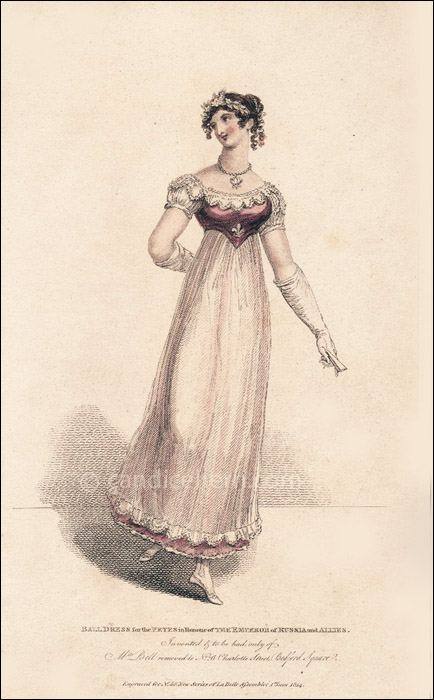 “BALL DRESS for the FETES in Honour of THE EMPEROR of RUSSIA and ALLIES.”

In the summer of 1814, Europe celebrated peace after the Treaty of Paris, following the fall of Napoleon and his exile to Elba. The Prince Regent invited his allies — William of Orange, Frederick Wilhelm of Prussia and Tsar Alexander I of Russia — to London. Tsar Alexander was also accompanied by his sister, the Duchess of Oldenburg. The royal visitors were feted and wined and dined and there was great public interest especially in the Russian Emperor and his popular sister.

This dress was meant to be worn at one of the many fetes honoring the royal visitors.

“White lace drapery over a pale pink satin slip; the drapery is trimmed round with scollops, which are edged with narrow blond lace, put on very full, and is rather shorter than the slip which is also edged with blond.  A pink satin body is worn over the drapery; the back is made tight to the shape, and is finished behind in a point to correspond to the front; the back is the same breadth as last month, but unusually high. Fancy sleeve. Scollops of lace edged with blond falls over the neck, and is edged to correspond with the train, The points of the body are ornamented with pearl fleurs de lys, which have a most tasteful effect. Pearl necklace, bracelets, earrings, and armlets; locket, intermingled pearls and colored stones. Head-dress the Wellington wreath of laurel in white or green foil, interspersed with regal crowns and other applicable attributes: it is a most elegant, novel, and tasteful ornament for any full head-dress whatever, and at this period should be univerally worn. White kid slippers and gloves.”

After the description of the second print is the following statement: