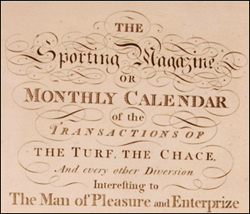 “The Masquerade given at the King’s Theatre, on the 1st instant, was numerously attended. Among the several characters, a Quack Doctor was most conspicuous – a Sylvester Daggerwood who had an infinite deal of nothing to say — Sailors, Countrymen, Chimney Sweepers, Flower Girls, Gipsies, a Tommy Tonsor, a band of Mrs. Montagu’s friends, a Rolla, who tore his fine speeches, full of logic and grammar, and a great number of Harlequins and Clowns, the former sans agility, the latter sans humor, filled up the scene. The supper was the best by far that has of late been given upon such an occasion, and the company was truly respectable. We cannot conclude this brief account without expressing our disapprobation of the indecent custom of men habiting themselves like women. The conduct of some persons of this description, during the evening, disgusted the greater part of the assembly; but at length some gentlemen, much to their credit, actually compelled them to retire from the merry scene.”

This article is featured in: Tales From the Regency Tabloids, Miscellaneous Tales