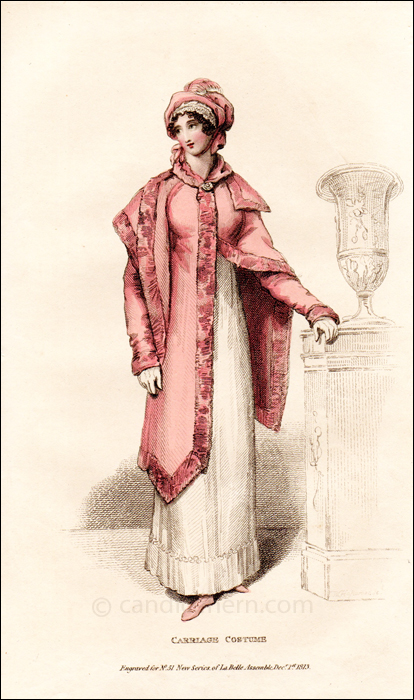 The purveyors of Regency fashion often named garments or accessories after people or events in the news. The mantle in this print, the Kutusoff mantle, is named for Field Marshal Mikhail Kutuzov of the Russian Empire, who fought against the French invasion of Russia. Under Kutuzov’s command, the Russian army faced Napoleon’s Grande Armée at the Battle of Borodino, and later counter-attacked once Napoleon retreated from Moscow, pushing the French out of the Russian homeland. It was a huge loss for Napoleon, and so, naturally, the British celebrated it.

“KUTUSOFF MANTLE: Pink or scarlet cloth mantle, with a broad velvet ribband to correspond, a spencer of the same materials, one sleeve of which is concealed by the folds of the mantle; the collar, which is high and puckered, fastens at the throat with a broach; and a long lapppel, which ends in a point, falls considerably over the left shoulder. A Kutusoff hat of pink or scarlet cloth, turned up in front, with a little corner to the right side, ties under the chin, and is finished with a pink or scarlet feather; a full puffing of lace is seen underneath. Plain cambric high dress, and pink or scarlet leather half-boots. Our readers will be able to form a much better idea of this very elegant mantle from our Plate than from description; its effect upon a tall and graceful figure is amazingly striking, and it is, for the carriage costume, decidedly the most elegant cloak that we have seen for some seasons back, and does the greatest credit to the tasteful fancy of its inventress, Miss Powell, successor to Mrs. Franklin, Piccadilly.”

In the “General Observations of Fashion and Dress,” the mantle shown in the print is again mentioned:

“The Kutusoff mantle, which we have given in our Plate, is the decided favorite of our most elegant belles; it is made in general in pink, scarlet, or ruby cloth, but we have seen a few in purple velvet, trimmed either with narrow gold binding or gold ball fringe, and nothing can be more elegant or superb.”