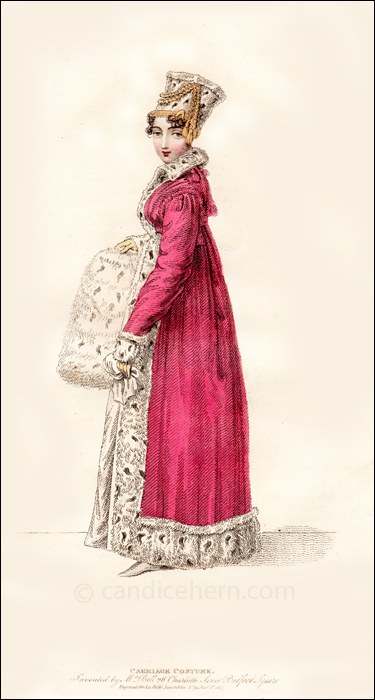 I adore the hussar cap in this print! And the imperious look on the model’s face almost dares us to find fault with it.

“A velvet pelisse of bright carmine red. Superbly trimmed with ermine; the tops of the sleeves caught up à-la-Mancheron, with rich military silk chain work, the colour of the pelisse. Russian hussar cap of ermine, ornamented with gold military chain. Limerick gloves and half-boots or shoes of kid, of a correspondent colour.”

The “General Observations on Fashion and Dress,” which was most likely written by Mrs. Bell herself, includes a bit more about this print:

“The truly elegant and costly carriage costume of which we have given so beautiful a specimen in our Plate, while it confers the highest honor on the taste of the inventress, is likely to be a most prevailing out-door covering for the carriage amongst ladies of wealth and fashion, being particularly adapted for the open barouche, as the manner in which it is made, with warm hussar cap of light and valuable fur, shields the fair wearer from all the severity of the pinching frost or cutting north wind.”

I suppose the somewhat haughty expression on the model is because she can afford to buy this pelisse!