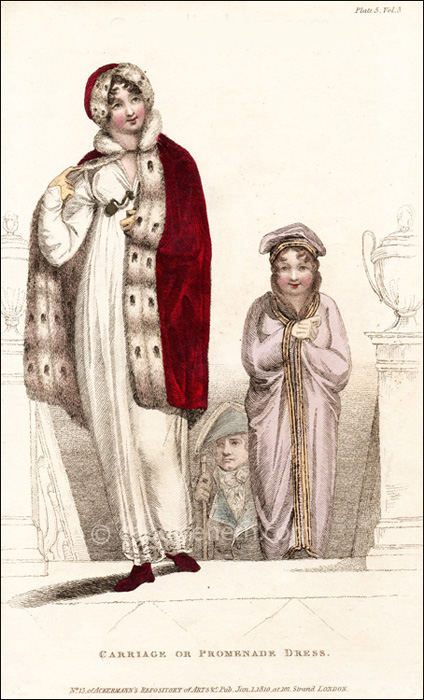 This is one of my favorite Ackermann prints. I adore the red mantle (which is not, as you might think, trimmed in ermine … keep reading to find out what it is) and matching red shoes, and the little watch fob and chain painted in gold metallic paint (hard to see that on the screen but it’s very bright in person). But I especially love this print because of the scene depicted: three people coming up the stairs from … somewhere. Behind the featured model is another lady in a lovely pale lavender mantle and matching hat, and she is followed by a gentleman in a bicorn hat carrying a walking stick. Lovely details!

“A round cottage gown of fine cambric or jaconet muslin, ornamented at the feet, collar, and wrists with borders of needle-work, or fine fringe. The waist confined at the bottom with a white ribbon, tied in short bows and ends behind. A French watch, chain, and seals in front of the figure. A Russian mantle of bright crimson velvet, lined throughout with the spotted American squirrel skin, with broad facings and high collar of same. The mantle clasped in the front of the throat with silver, gold, or steel. The hat worn generally with this attractive mantle is of the Spanish order, with a variegated feather resembling the fur, pendant toward one side. We here, however, give the Siberian cap, composed of the same material, and trimmed with skin, the same as ornaments the mantle, and as selected by the elegant and distinguished female to whom we are indebted for this specimen of superior taste. The boots, it will be seen, are of crimson velvet, laced with gold cord. This mantle and cap are exceedingly elegant, when composed of emerald green velvet, trimmed with leopard skin. It is furnished by Miss Millman of Half-Moon Street, Piccadilly.”

Wouldn’t you love to see this in emerald velvet and leopard skin?