Though the magazine does not name who wore this dress, it boasted in an advertisement that the dresses depicted in its prints “are not imaginary but really existing ones.” This dress would have been worn by a noble woman of wealth. 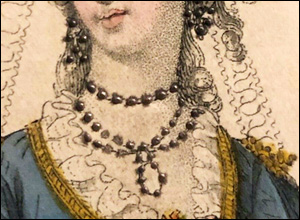 The diamonds of the necklace and earrings, in the headdress, as well as the watch and watch fob are all painted in bright metallic silver paint.The shininess is difficult to see online, but here is a close-up, which gives some idea of its effect, as well as its three-dimensional quality. This expensive magazine was the first to introduce the use of metallic accents. Others followed, but never with the high quality and workmanship of the Gallery of Fashion.

There were four required elements of a court dress at this time: hoop skirt, train, white feathers, and lappets. The train cannot be seen in this view, but is mentioned in the description.

“The front hair frizzed upon the forehead; Chiffonet of white crape, spangled with gold, and purple velvet, looped with diamonds; some of the hair drawn through in ringlets, and the hind hair turned up in a full chignon. Three white ostrich feather placed on the right, and a diamond star on the left side. White crape petticoat, magnificently embroidered in purple, black, and gold; deep white fringe, headed by a black velvet ribband, ornamented with gold tassels. Body and train of purple satin, richly ornamented with gold lace; epaulettes of the same, looped with diamonds; short sleeves of white satin, spangled with gold. Double ruffles, tucker, and lappets of point lace. Gold cord and tassels round the waist. Diamond necklace and ear-rings. White shoes, embroidered in gold.”