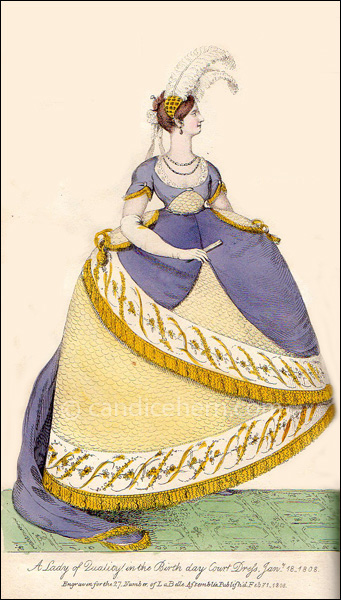 Described in the magazine as follows:

“A white satin petticoat , covered with gold spangled scaling, ornamented round the bottom and draperies with a deep border of white velvet, embroidered in an elegant pattern of gold; and finished with a rich fringe of the same. Body and train of purple velvet, trimmed with a similar fringe; pocket-holes ornamented with a rich gold cord and tassels. Crescent stomacher of gold mosaic, finished with a splendid diamond brooch; front of the sleeves ornamented with the same.

“Diamond necklace, earrings, and bracelets. Hair a la Madona, ornamented with a gold net; confined at the back of the head with a diamond comb and star, from whence descent court lappets of Brussels lace. Two curled ostrich feathers placed toward the left side. Plain tucker of lace corresponding with the lappets, brought to a point at the center of the bosom. Shoes of ruby velvet, embroidered and trimmed with gold. Gloves of superfine French kid, worn above the elbow. Fan of carved ivory, with ruby stud; mount of ruby crape, richly embroidered with gold and spangles.”