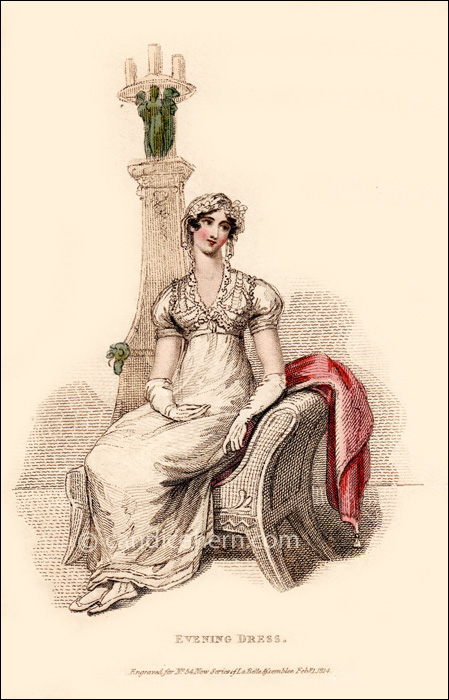 Despite the print title, the description clearly names this dress a Dinner Dress, which would categorize it as Half Dress. Such a dress would still be worn during the evening, but at an event much less formal than an event requiring Full Dress.

“DINNER DRESS. Frock of rich twilled white sarsnet, the body the same as last month; the sleeve very short and full; a plain band of velvet at the bottom, which is ornamented with three rows of fashionable ribband trimming. The bottom of the frock is trimmed in a similar manner, with three rows of ribband fancifully disposed as a wreath of flowers. The neck is delicately shaded by a tippet a-la-Diane, which is composed of lace and white satin; it is formed behind as a small cottage tippet entirely of lace, but the front, as our readers may see by our Plate, is made to fit the neck, and at the same time displays the shape to the greatest advantage; it comes up very high in the back of the neck, and is edged all round with a fine narrow lace; a part of the letting-in-lace of which it is composed, and which is also edged with narrow lace, ties in front of the bosom, and just above the lace bow a small bouquet of winter flowers has a very pretty effect. Head-dress the Wellington hood of fine white lace, the form is simply that of a hood which just fits the head, and is finished by a rich lace border, which is put round plain, except on each temple, where it is very full; lace cords hang carelessly at each ear; it is ornamented with a winter flounce in front. Hair very much parted on the forehead, and disposed in large but light curls on the temples. White velvet slippers lightly embroidered with silver in front. White kid gloves.”