Click on images to see larger versions and to read original magazine descriptions, when available. 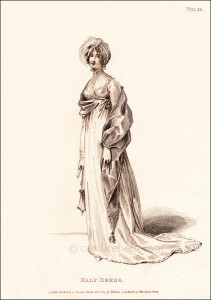 During the Regency period, the terms Full Dress, Half Dress, and Undress were used for both men and women to generally describe the type of dress worn for different occasions. I have found no definitions for these terms in the ladies’ magazines of the period, but they are used so often that one can only assume that the terms were well understood by the magazines’ readers, so that no explanation was required. My general definitions are based on a study of the prints using these labels. Still, the designations can be confusing.

FULL DRESS was the most formal, and included attire worn in the late evening to very formal events. (For more information on Full Dress, see the Full Dress Overview on this website.)

UNDRESS was the least formal, having nothing to do with being actually undressed, but with being dressed very casually or informally, ie the sorts of clothing one would wear at home, walking outdoors, shopping, etc. 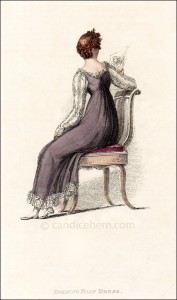 HALF DRESS fell somewhere in between. Half Dress follows the less formal morning dress and afternoon walking dress into the late afternoon and early evening, and sometimes later in the evening if the occasion was not strictly formal. Prints labeled “Afternoon Dress” would be recognized as Half Dress. Dinner dresses and Opera dresses also were typically considered Half Dress, as neither dinner parties nor the theatre were deemed formal occasions.

Sometimes a Promenade Dress is labeled as “Promenade Half Dress.” which one can assume referred to an ensemble worn in the late afternoon, generally after 5:00pm, when the fashionable haute ton made a show of walking through Hyde Park. The ensemble would be more dressy than a morning walking dress, with perhaps richer fabrics and trimmings, but not as fancy as an evening dress.

So, as you can see, Half Dress is sort of a catch-all middle area of fashion. 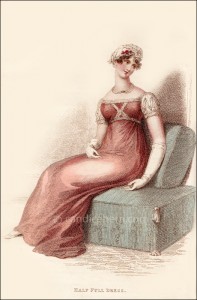 And just to confuse us further, there is also HALF FULL DRESS. It appears as though Half Full Dress is simply Half Dress with a bit of fancy accessorizing. One might, for example, attend the opera in Half Dress, then add expensive jewelry, hair ornaments, silk shawls, etc to attend a late evening party. So, not quite the full-blown elegance and richness of Full Dress, but fancy enough for a night on the Town. Half Full Dress is more or less the equivalent of “semi-formal.”

The prints continue to confound with the occasional “Promenade Half Full Dress” that looks like an ordinary walking dress, or an “Evening Half Dress” that looks like a formal ball dress. It is necessary to study the descriptions of fabric and trimmings to make sense of the terms. But frankly, there are times when the labels make no sense at all.

For the most part, however, we can safely assume that Half Dress is something between Undress and Full Dress.