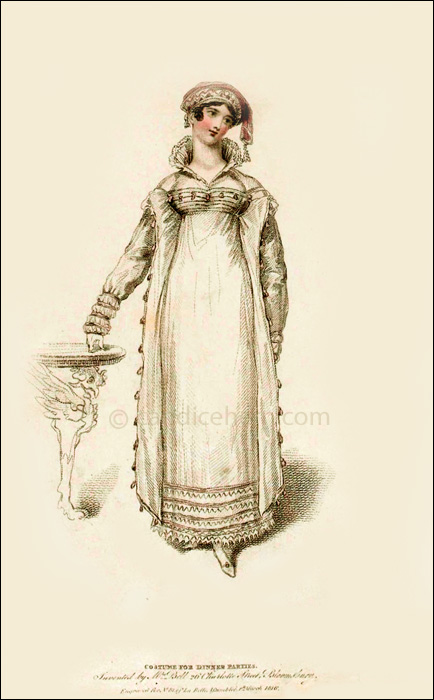 In the General Observations on Fashion and Dress for this month, it is stated that white dresses prevail for home parties. For dinner dresses, and for a majority of half-dress in general, some sort of hat is most often worn. Here, the “sultaness turban” is quite charming.

“Persian robe of white satin, ornamented with a beautiful coloured trimming over a slip of crape, finished round the border by five quillings of blond; the body of white satin, trimmed at the bust to correspond with the robe; full sleeves of crape, confined from the wrist to the middle of the arm, beneath the elbow, with white satin, with a partial fulness at the top of the sleeve next the shoulder, from whence the robe falls off. Fichu fastening in front with a small ruff in the Queen Elizabeth style. Sultaness turban of pale ruby, or Saxe Cobourg crimson, richly finished and ornamented with silver or pearls. White satin slippers with ruby coloured rosettes, and white kid gloves.”