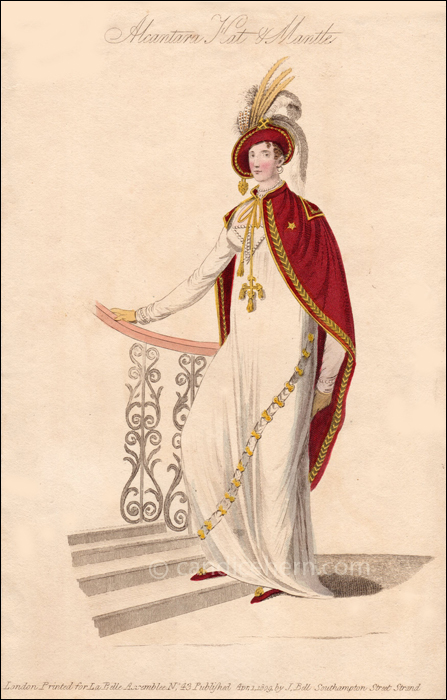 This ensemble falls into the Half Dress category as it is described as being appropriate for the opera or evening party. Imagine sitting behind this hat at an opera!

Though the proportions seem a bit off in the drawing (the head appears too small for the body), this must have been a very striking costume in person.

“No. 1.–ALCANTARA HAT AND MANTLE. These unique and elegant articles are derived from the Spanish costume; and in a great degree resemble those worn by the Knights of the military Order of Alcantara, in that country, on their great festivals, &c. It is composed of crimson silk, with a rich embroidered border in gold. The collar is narrow, and meets in front of the throat, where it is confined with a cordon of gold, to which is suspended the badge of the Order. The mantle is so disposed a to expose the right side of the figure, while it entirely conceals the back and adverse side, and on the bosom is a rich embroidered star of gold. The mantle is gradually sloped from the throat to its termination, near he bottom of the robe behind. A deep embroidered cape ornaments the back and shoulders, the square points of which appearing in front, give a finished relief to the whole. The hat is composed of the same material, edged with a border the same as the mantle; the crown is round, sitting close to the head, with a band of silk and gold cord tastefully blended, and terminating on the right side with a knot and gold tassel. It is turned uo in the front with a gold ornament similar to the badge of the Order. A plume of ostrich, bird-of-paradise, or other feathers is placed nearly in front, one of which, of an unusual length, droops till it meets the left shoulder. The robe worn with these attractive and novel articles is of white sarsnet, with a pointed drapery border of the jonquille or primrose, or a trimming of Chinese floss. The stomacher and other ornaments are of pearl. Shoes the same as the mantle with gold rosets. This splendid costume is particularly well adapted for the Opera; and, divested of the mantle, also for the evening party. —This elegant and original dress is the composition of Mrs. Villars, Lower Gower-street, Bedford-square.”

In the General Observations on the Most Approved Fashions for the Season, which follows the print descriptions, international influences abound. Besides this Spanish mantle and hat, there are mentions of cloaks in the style of the Austrian Hussar, a Cossack pelisse, a Turkish coat, Polish vests, Roman tunics, a Carthage cymar (a type of scarf), a Spartan helmet, French caps, and oriental turbans.