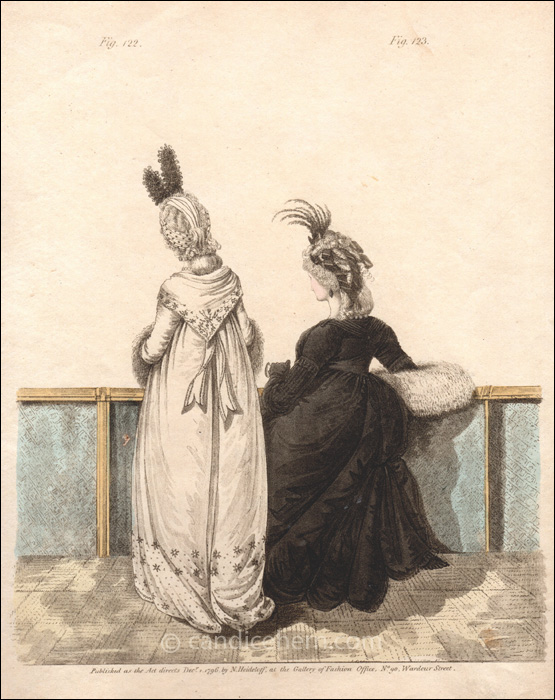 Besides being mourning attire, it is difficult to categorize these dresses as evening full dress, or perhaps evening half-dress. However, as the seated lady appears to have an opera glass or lorgnette in her hand, it suggests an opera setting. In that case, these would be considered Opera Dresses, so I am going to name them both as such, classifying them as Half Dress.

Though we only see the backs of the dresses, it is an interesting contrast of the deep black of full mourning and the black-on-white of half-mourning at this time, when I suspect the rules of mourning dress were less strict than they would become in the next decade.

“HALF MOURNING DRESS. FIG. CXXII.– Bandeau of white muslin, embroidered in black; toupee and sides in long loose curls; chignon turned up plain, and the ends turned over the bandeau in ringlets; two black brush feathers in the front. Black and white striped sash, pinned together behind. White enamelled hoop ear-rings. One string of pearls round the neck. Gray gloves and shoes. Silver fox muff.

“MOURNING DRESS. FIG CXXIII.– Toupee in loose curls; black enamelled crescent, and black plumes de cocq in the front; the hind hair turned up plain, the end returned in ringlets on the neck. Dress of black muslin, the petticoat with a broad pointed belt over the body; short sleeves in small plaits, trimmed with black lace; epaulettes of the same; scarf trimming round the neck, looped on the shoulders and behind: the whole trimmed with black fringe. One string of black beads round the neck. Black enamelled ear-rings. Black gloves and shoes. White swan-down muff.”

This article is featured in: Regency Collections ~ Within Collections: Fashion Prints, Half Dress, Mourning Attire