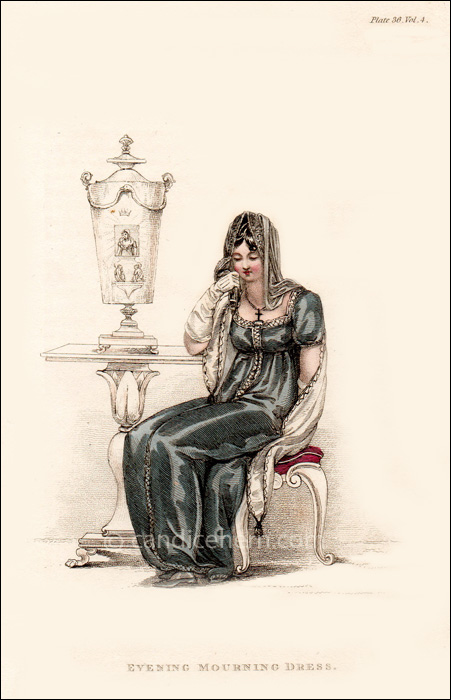 This mourning dress honors the death of Princess Amelia, youngest child of King George III, who had died on November 2, 1810 at age 27. A note in the January 1811 issue of La Belle Assemblée states that official public mourning for Princess Amelia was to have lasted through January 11, but that “the Court has extended it to three weeks beyond that period, in complement to the deceased Queen of France” (Marie Joséphine of Savoy, wife of the exiled Louis XVIII, had died two weeks after Princess Amelia.)

Although there are bits of white used here, this appears to be a full mourning costume. The description indicates how to change it to half-mourning by use of a grey or white under-dress.

“A convent robe of black gossamer gauze, with demi-train and short sleeves, ornamented round the bottom, up the front, and on the bosom and sleeves, with a checkered trimming of black bugles, or steel. This dress is worn at present over an under-dress or slip of black sarsnet, but hereafter will form a most pleasing habit when extended over a slip of white sarsnet or silver grey. The head-dress consists of white net, bordered with black bugles or steel, and finished with correspondent tassels. The hair in dishevelled curls, beneath a neck-chain and convent cross of jet, with ear-rings and bracelets to correspond. Spanish slippers of black queen silk, with jet clasps, or rosettes of bugles. Gloves of black or white kid. Fan of white crape, with mourning border, and medallion in black foil.”