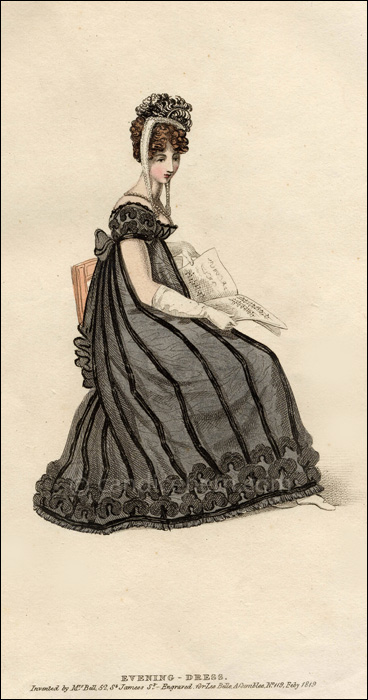 Although Queen Charlotte had died in late November of 1818, we still see a lot of black and gray in the fashion prints three months later. The queen was much admired and the nobility would likely continue to honor her death well beyond the prescribed official mourning period. In this print, the white slip under the black gauze provides a soft respite from the unrelieved black of full mourning.

The print is described (uncharacteristically briefly) in the magazine as follows:

The following is from the general fashion commentary:

“The mourning is now but partially observed, except by ladies belonging to the court; and even amongst them coloured pelisses, rainbow scarfs, and variegated Madras turbans have made their appearance. The festive ball and the midnight gala have now invariably adopted their usual motley costume, and for the former the elegant engraving in this Number is now most admired and likely to be in high estimation.”