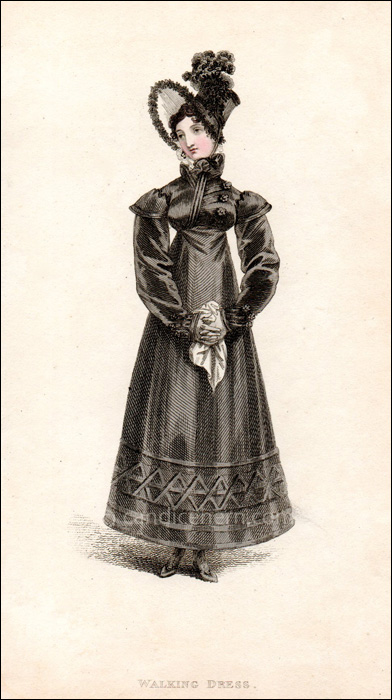 This mourning costume was for the death of Princess Charlotte who died on November 6, 1817 at age 21, after giving birth to a stillborn son. The public reaction to her death was comparable to that of Princess Diana in 1996. Henry Broughman, who would later be Lord Chancellor, wrote: “It really was as though every household throughout Great Britain had lost a favourite child.” The magazines for this month are filled with details of her death, the plans for her funeral, and the official dates for mourning. They also showed dresses for mourning.  In Ackermann’s Repository of Arts, both fashion prints for this month showed mourning attire. Even more indicative of the depth of public mourning for the princess is that the following month’s issue also included two fashion prints of mourning attire. Not even with the Queen’s death in 1818 nor the King’s death in 1820 were there so many mourning ensembles in the ladies’ magazines. In the prints for Princess Charlotte’s death, more than for anyone else, the faces of the models are as somber as their attire.

“A high dress composed of bombazine; the bottom of the skirt is ornamented with black crape, disposed in a very novel style. The body, which is made tight to the shape, wraps across to the right side; it is adorned in a very novel style of piping of black crape disposed like braiding, and finished by rosettes of crape, in the center of each of which is a small jet ornament. Long sleeve, tastefully finished at the wrist to correspond with the body, and surmounted by a half-sleeve of a new form trimmed with crape. A high standing collar partially displays a mourning ruff. Claremont bonnet, so called because it is the same shape as the one recently worn by the Princess [note: Claremont was the name of the home where she and her husband, Prince Leopold, lived]: it is composed of black crape over black sarsnet, and is lined with double white crape. The crown is rather low, the front large, and of a very becoming shape; it is tastefully finished by black crape, and ornamented by a bunch of crape flowers placed to one side. Black shamoy gloves, and black shoes.

“We have again to acknowledge our obligations to the lady who favoured us last month; and we understand that the dresses from which our prints this month have been taken were also purchased from Mrs. Bell of St. James’s-street.”