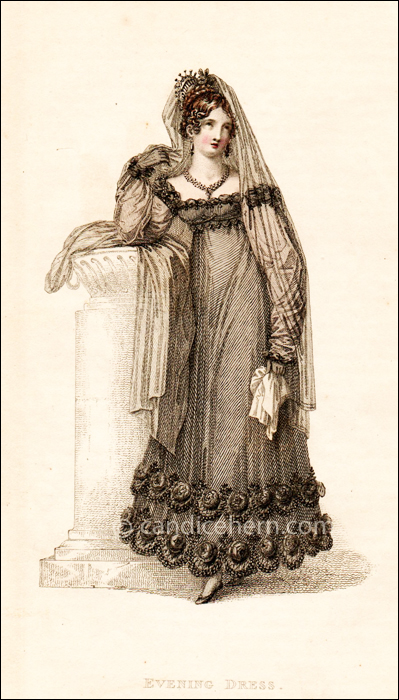 This mourning dress was for the death of Queen Charlotte, who had died on November 17. Though we often think of mourning as a time of seclusion, the number of evening dresses in the full black of mourning shown in the magazines of the time suggest that mourning for a public figure, at least, did not require one to curtail one’s activities, but merely to show respect by wearing appropriate mourning.

“A black crape dress over a black sarsnet slip: the body is cut very low and square round the bust, and is tight to the shape; it is trimmed round the bosom and the back with a rouleau of crape intermixed with jet beads; this trimming does not go round the shoulders. The bottom of the waist is finished by rounded tabs. Long sleeve, made very loose, and finished at the hand by a rouleau to correspond with the bosom; the fullness of the sleeve is disposed on the shoulder in puffs, which are interspersed with jet beads, some of which also confine it across the arm: this forms a new and elegant style of half-sleeve. The bottom of the skirt is cut in broad scallops, the edges of which are ornamented with narrow black fancy trimming, and an embroidery of crape roses, with branches of crape leaves disposed between each; a second row of trimming is laid n at a little distance from the first. The front hair is much parted n the forehead, and disposed in light, loose ringlets, which fall over each ear. The hind hair is braided and brought round the crown of the head. Head-dress, a long veil placed at the back of the head, and an elegant jet ornament. consisting of a rose and aigrette, which is also placed far back. Shamois leather gloves and shoes. Ear-rings, necklace, and cross, jet.”