Fashions of London and Paris, November 1798. 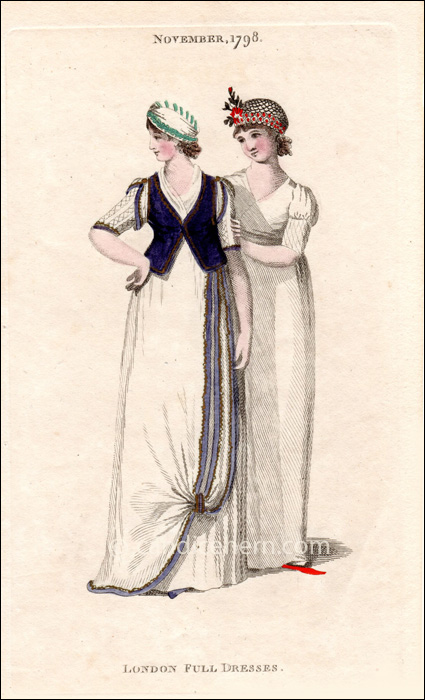 The famous Battle of the Nile had been fought against Napoleon and the French in August 1798, and won under the leadership of Lord Nelson. Fashionable English society paid homage to Nelson with images of him everywhere and with all sorts of things named for him, and paid homage to the battle by embracing all things Egyptian.  In this print, you can see how fashion acknowledged Nelson, the navy, the battle, and Egypt in the naming of accessories.

“Fig. 1.–The Nelson cap, of white or black, or other coloured satin or velvet, the form that of a sailor’s cap, the sides and top the same, trimmed round the sides and over the top with oak or laurel. Anchors of diamonds, or bugles, may be worn in front as ornaments.

“The Egyptian robe of white muslin, the back as usual; the fronts of purple satin, which extend about half a quarter below the waist, meet as represented. The sleeves are formed of alternates stripes of netting and small plaits. Full epaulets looped with with gold loop and button. On the left side is a distinct piece, which is fastened at the bottom with a gold slide. The whole is bound with purple satin ribbon, and finished with gold trimming.

“Fig. 2.–Hat of velvet and straw, with ribbon drawn in small puffs through the front; plain robe.”

In the General Observations, more naval and Egyptian references are made:

“The prevailing colours are scarlet, purple, blue, and puce brown. Anchors and oak leaves are the prevailing ornaments. The crocodile bonnet has just made its appearance, made entirely of leather and ornamented with the Nile Plume.”