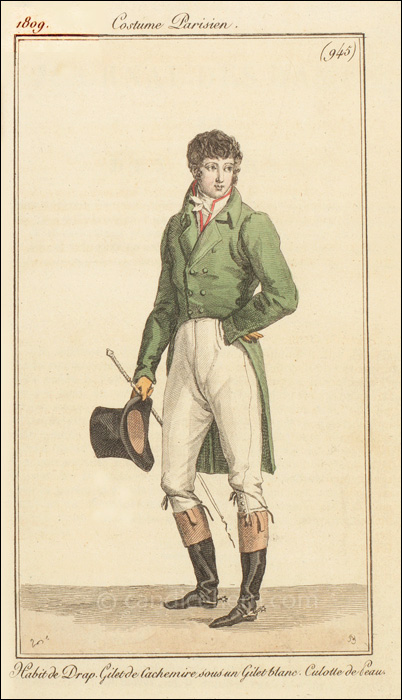 This fashionable gentleman is turned out in the most stylish riding wear. Unlike British women’s fashion, in which French styles reigned supreme, men’s fashion was quite the reverse. Most outdoor wear for European men, for riding, shooting, or walking, was based on British styles. So although this is a French print, the style echoes what was worn in England at this time. With a bit of a French flair, of course.

The gentleman wears a green wool frock coat, made full in the shoulders, and with long sleeves that reached the knuckles. (The term frock cook was used from the late 18th century for a double-breasted coat with turned-down collar and tails. Toward the end of the Regency and for the rest of the 19th century, the term came to be associated with a waisted coat that came to the knees.)

Beneath his coat, he wears two waistcoats, a fashion affectation seen more in French men’s wear than in Britain. The one closest to the body is made of cashmere (it was January, after all). The outer waistcoat is white trimmed in bright red. The neckcloth around the standing collar of his shirt, is tied slightly off-center, another decidedly French affectation.

The breeches are made of white leather and button at the knee. He wears top boots with spurs and boot garters. His gloves are yellow, probably kid. He carries a top hat and a riding crop.