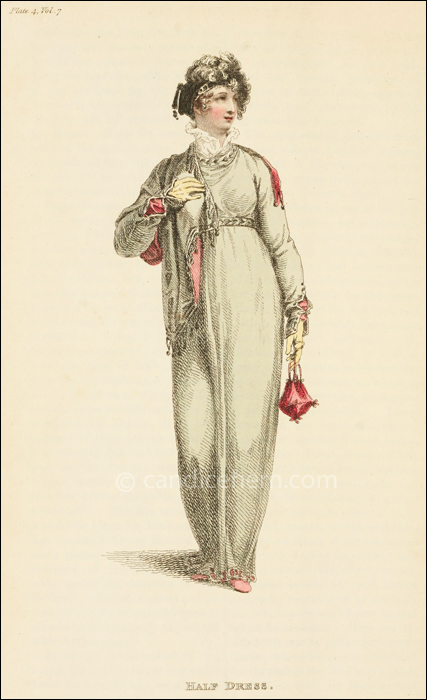 Half dress is what was worn in the late afternoon or early evening — and sometimes later evening — for less formal occasions than a ball or formal reception or party, where full dress would be required. Read more about Half Dress here, where I try to make sense of this sometimes confusing term.

“A high Roman round robe of stone colour, or pale olive cloth, embroidered in a variegated chenille border; long sleeves, finished at the wrist to correspond, and lined with pink sarset. Pomeranian mantle of silk, the colour of the robe, lined with pink, and finished with deep Chinese silk fringe. Cap of black or coloured velvet, ornamented with a rich silk tassel, and curled ostrich feathers, placed towards the left side. High standing collar of muslin or net, edged with needle-work, rising above the robe at the throat. Pink embroidered ridicule. Gloves a pale lemon colour, and half-boots of pink kid, trimmed with narrow sable fur. For this graceful and appropriate costume we are indebted to the taste and invention of Mrs. Gill, of Cork-street, Burlington-gardens.”

Note that the term ridicule is used for the purse. This term was used by the French in the late 18th century, as a bastardized form of réticule, possibly because some people (ahem, men) thought it ridiculous to see women carry in small bags what was once hidden in their pockets. The English picked up the term and used it for several decades. The English term reticule was not in common use until the late 1820s or early 1830s.

This article is featured in: Regency Collections ~ Within Collections: Half Dress