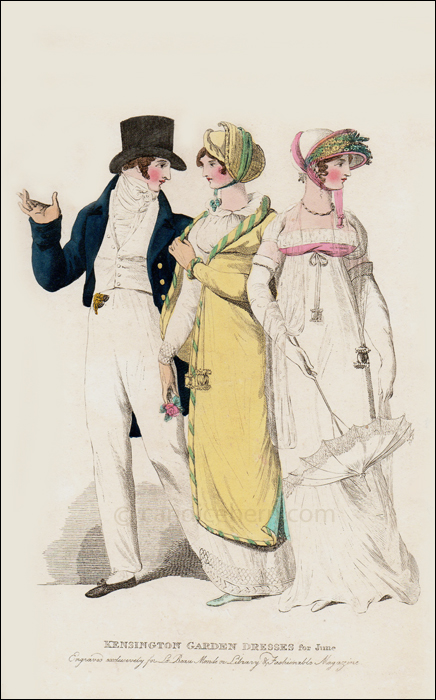 I have never seen a fashion print from this magazine that showed only a single figure. They almost always show groups of two, three or more figures. I especially like when they show male and female figures together, as here. In this print, we see a very early example of trousers, which began to be worn by gentlemen only a few years before.

“Fig. No 1–Kensington Garden Dresses.–A rich India muslin dress, with a superb embossed border, worked in floss silk, white or coloured, made short,walking length; high in the neck, and drawn full round the throat with a tuban collar falling over; the sleeves are long and full, and confined tight round the wrist; whilst the back of the dress is loose and drawn to the shape. The Arabian Tunic worn with this dress is composed of India shawl work of a brighter primrose, elegantly relieved with a turban trimming wreathed with green sarsnet. The Arabian hat is a graceful melange of the turban and gipsey forms, of a delicate straw or chip, confined under the chin, with a bow and tassels of green sarsnet. Gloves straw colour, and half boots of jade green.

“Fig. No 2–A short train of white net, bound with white satin round the bottom: the back of the dress is made square and low as also the front to match, with a deep rich lace falling over; a French body of pink satin, confined close under the bosom; the sleeves are short and full, and bound with white satin to correspond with the bottom; the Catalani tippet of white lace drapery, finished at one end with a rich white lace tassel, is thrown negligently across the shoulder, whilst the other end hangs downs plain, without ornament. The Flora bonnet is made of white chip, trimmed with pink sarsnet and ornamented in front with a bunch of various coloured flowers. Necklaces of emeralds, or imitations of the same, are much worn with this dress; the gloves and shoes are of white kid.”

The Catalani tippet, which is so sheer it’s almost hard to see, is named after the famous opera singer Angelica Catalani, who had taken London by storm two years earlier.