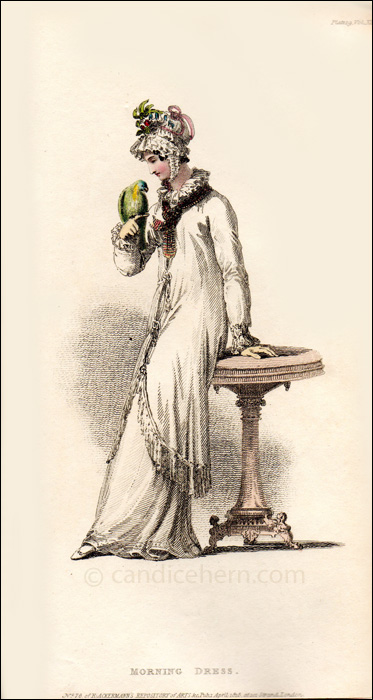 This print is interesting in that it shows a woman holding a parrot on her finger. At least, I think it’s a parrot. I suppose it could be some other exotic green bird. But what an unusual prop!

“A loose robe of line cambric or worked jaconet muslin, over a petticoat of the same, flounced with French trimming; long full sleeve, confined at the wrist with treble drawings, and ornamented with corresponding trimming. The robe, negligé, of demi-length, is confined at the top by a narrow collar, or gathered into a Vandyke ruff, and is worn with a coloured silk handkerchief, tied carelessly round the neck, and is fastened down the front with bows and tassels. A mob cap, composed of net and Brussels lace, decorated with a cluster of flowers, and bows of satin ribbon. Hair curled in the neck. Slippers or sandals of pale tan-coloured kid. Gloves en suite.”

The mob cap, sometimes called a cornette, had been around for centuries in one form or another. It was used throughout the Regency as a cap worn with indoor morning dress, or underneath a bonnet. During the early years of the Regency, the cornette was fitted close to the head. Around 1814, they began to show more fullness, in the traditional form of a mob cap, as here. This fashionable version, with its fine lace and flowers and ribbons, bore little resemblance to the full mob cap still often worn by housekeepers and other female servants.