Click on images to see larger versions and to read the original magazine texts describing the prints. 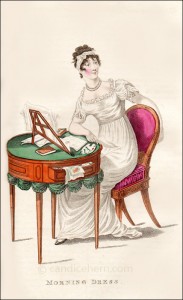 Many fashion prints of the Regency period are labeled “Morning Dress.” This does not designate a specific type of dress. The “morning” label designates nothing more than the time of day the ensemble was worn.

There are basically two types of morning dress: those worn indoors and those worn outdoors. A handful of fashion prints in my collection are specifically labeled “Indoor Morning Dress,” while a great many are labeled “Morning Walking Dress,” ie an outdoor ensemble.

Indoor morning dresses are almost always white, relatively simple, and a bit more loose-fitting than other dresses. They would be worn in the privacy of one’s home, while having breakfast or writing letters, or other such domestic activities.  Most prints of indoor morning dress show women seated and doing something, such as drinking tea, reading a book, drawing, writing, or sewing. 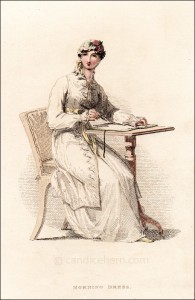 They also almost always show the figure wearing a cap.  We often think of caps being donned by elderly spinsters or dowagers, but married ladies of any age typically wore caps at home. We must remember, too, that ladies of the Regency period did not wash their hair as often as we do, and caps may have been used to cover up hair that was no longer clean and shiny. The caps are most often white, made of muslin or satin, and trimmed with lace and ribbon. They were not necessarily removed when the lady left the house; she would place her bonnet atop her cap, so that its lace trim would show through.

Indoor morning dresses also might be worn with a bandeau confining the hair, as in Figure 1, though it would typically be a simple band of fabric tied with a bow, and not the fancier stiffened and ornamented bandeau worn with evening wear. In any case, it is the rare British fashion print that shows an indoor morning costume without some sort of head covering.

Because indoor morning dresses were typically worn in the privacy of one’s home, they did not need to be in the height of fashion, especially for the ordinary, middle-class woman. Morning wear was likely the most common type of family hand-me-down. The fashion prints showing the latest styles would help the home seamstress update an older morning dress in the current styles. More affluent ladies would indulge in new frocks to wear around the house, following the styles presented in the magazines. And no doubt the most fashionable modistes encouraged clients to order new morning dresses each season. For ordinary women with more modest budgets, evening dress and warm, sturdy outer wear would take precedence over new indoor morning wear. 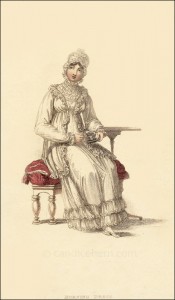 The style of morning dress followed the trends seen in other types of more formal wear. Hems were longer in the first years of the new century and hemlines were simple and unadorned. Going forward in the Regency years, hem lengths got shorter and hemlines became more elaborately adorned with flounces and other fancy trimmings. Waistlines sat lower in the first decade of the century, and rose to their highest levels around 1816-1819. Many indoor morning dresses are long-sleeved, and the sleeves become much fuller starting about 1816.

Most morning dresses have high necklines, or lower necklines filled in with a fichu, scarf, lace, or chemisette. This is especially true of outdoor dresses. An occasional print of an indoor morning dress will show a slightly lower neckline, as in Figure 1, but even this neckline is filled in with lace, for a more modest daytime costume. For the most part, very low necklines, where a bit a cleavage was on display, was left to evening wear. 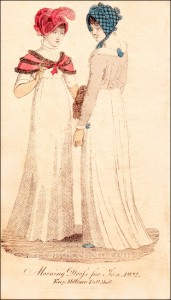 While many prints of indoor morning dress show comfortable-looking garments that might never have left the house, some indoor morning dresses could have served as outdoor dresses by the simple addition of an outer garment (for example, a spencer, pelisse, or mantle) and a bonnet. The print from 1818 shown in another article on this site (click here to see it) shows a lady wearing indoor morning dress with a large bonnet and shawl sitting beside her, ready to don for going outdoors.

An outdoor morning ensemble, most often labeled “Morning Walking Dress” in the fashion prints, would have been worn for informal walks, visits to shops or libraries, or to church services, as shown in Figure 5. They are distinguished from those more elegant outdoor ensembles worn during the fashionable promenade hour, around 5:00pm, when those who wished to see and be seen walked or drove through Hyde Park and other park venues. Like the more formal “Promenade Dress,” the “Morning Walking Dress” would always include some sort of outer garment, a hat, gloves, and sometimes a parasol. 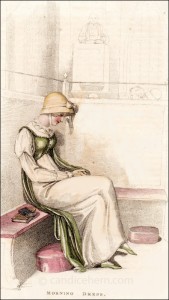 The dresses underneath a pelisse or spencer continued to be primarily white. Sprigged and printed muslins were certainly available and worn, especially for day wear, but are seldom seen in fashion prints.  This could, however, simply be a matter of the difficulty of hand-painting a printed fabric. (Remember, each of these fashion prints was hand-colored. Though I have a handful of prints with beautifully painted plaid or stripped dresses, I have seen very few that show fabrics with sprigged or other small printed patterns.)

As with the indoor morning dresses, the hem lengths become shorter and hemlines more decorated as the period progresses.

During the first few years of the new century, we see outdoor morning dresses with short sleeves and long over-the-elbow gloves, as in the lady on the left in Figure 4. Short sleeves disappear for day wear around 1805, though they continue to be seen in French prints throughout the period.

The outer garments, especially the spencer and the pelisse, show the same evolution of style as in other garments. Cuts are more simple and tailored in the early years, with little or no ornamentation, evolving into more elaborate styles dripping in decoration. Sleeves become fuller in the later years, eg 1815 onward, and shoulders become more emphasized with epaulettes and padding.

Bonnets also evolve over the period, from short brims to huge, wide pokes, from small crowns at the back of the head to heavily ornamented crowns of soaring heights, as in Figure 6.

I have seen many suggestions that indoor morning dresses were what one wore to receive callers. It must be remembered, however, that formal calls were typically made in the afternoon, not in the morning. A lady at home to visitors would have dressed slightly more formally, perhaps in a fancier afternoon frock. The ladies paying calls, though, might well have worn one of their best outdoor morning dreses.

Click on images to see larger versions and to read the original magazine texts describing the prints.